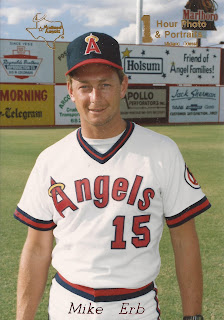 Mike Erb had got himself a reputation as someone who wasn't completely into his pitching. The Southern California right-hander might just as well have been surfing than pitching, according to The Los Angeles Times.

It was just a matter of making that commitment to baseball.

"I'm still the same person," Erb told The Times in June 1990. "I'll always be Mike Erb. But in order to get respect and not have this surfer image, I've got to portray a more serious role."

He spoke having gone 3-1 with a 3.18 ERA for the Angels' AAA team in Edmonton. He would end the season at 4-4 with a 4.26 ERA and a trip to AA Midland. But, whether or not Erb got the respect he sought, he never got to the majors.

Erb began with the Angels system in 1987, taken by California in the second round out of San Diego State. He left after his junior year. In college, with the Aztecs, Erb began to get that surfing reputation.

But he could also pitch. He threw a no-hitter his second season there. He also had a sub-3 ERA at the start of the playoffs that season.

"He's a very head-strong kid, but that's a lot of what makes him successful." San Diego State pitching coach Gary Kondratek told The Times in 1986, Erb's second year at the school. "He's matured a lot in his two years here. He's learned that there's more than one way to skin a cat and that Mike Erb's way isn't always the best way to go about it."

By March 1987, Erb owned the school strikeout record, getting his 238th career punch-out while striking out 10 against Bowling Green, according to The Times.

He didn't make it above single-A until 1990. His season that year started with a bruised shin in spring training, hit by a ball off the bat of Garry Templeton. He spent time that year AA Midland and the majority of the season at AAA Edmonton. The Midland time came later in the season, giving up three hits in a contest in early August for Midland.

Back with the Angels for spring training 1990, Erb gave up two runs in a mid-March game, later sent back to Edmonton. Used mainly as a reliever, Erb got into 31 games with a 3.76 ERA. It was his final full season with the Angels.

He returned briefly in 1992 for two unsuccessful appearances at Edmonton, but was released by the end of April. Erb pitched three more outings with Seattle's AA team in Jacksonville, ending his career.