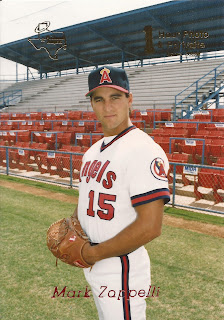 Mark Zappelli explained his approach after this June 1998 win for independent Somerset.

Zappelli went into the eighth inning, giving up a single run and six hits, according to The Bridgewater Courier-News.

"My goal," Zappelli told The Courier-News, "is to go out there and make them swing the bat."

Zappelli made them swing the bat over 10 professional seasons. He made AAA in four of those seasons, but he never made his presumed ultimate goal of the bigs.

Zappelli's career began in 1989, signed by the Angels as an undrafted free agent out of Cal Poly.

Zappelli started with the Angels at single-A Quad City. He picked up five wins in 48 relief appearances and a 1.85 ERA.

Zappelli moved to high-A Palm Springs and AA Midland for 1990. He picked up a relief win in a May game for Midland. In 56 total outings, he turned in a 3.7 ERA.

He then split 1991 between Midland and AAA Edmonton. He got 17 outings at Edmonton, with a 4.44 ERA. He played a trick on fans that summer wanting to see Fernando Valenzuela play for Midland by wearing Valenzuela's jersey out for fans.

He divided 1992 again between Midland and Edmonton. He made the AA All-Star game and turned starter. In 37 outings, 24 starts, Zappelli went 12-4, with a 3.37 ERA. He picked up his seventh win in a July game against Shreveport.

Zappelli played briefly at AAA Vancouver in 1993, then returned in 1995 for independent Tri-City. He then saw AAA Nashville for nine games in 1996 and high-A Prince William. He then played two seasons in Taiwan.