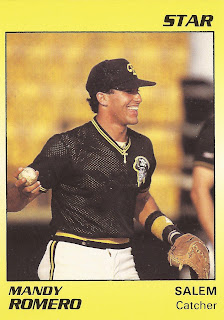 Mandy Romero looked back on his first games in the majors in May 1998 - and he tried to look forward.

"That was a great experience, something that I'll never forget for the rest of my life," Romero told The Las Vegas Sun of the 21 major league games he saw the year before with the Padres. "Hopefully I can get back up there again this year."

Romero got those games with the Padres in 1997 after nearly a decade spent in the minors. He also got back again in 1998 and  one final time five years later, in 2003.

Romero's pro career began in 1988, taken by the Pirates in the 19th round of the draft out of Eastern Florida State College. Romero also went by his given name, Armando Romero.

Going into 1991, Romero talked to The Associated Press about playing in spring training - and what his high jersey number meant.

"I'm not blind," Romero told The AP. "I know I have no chance at all of making the club. I know who's in front of me and what my situation is."

Romero's situation continued that year at AA Carolina, then to AAA Buffalo in 1993. The catcher saw 42 games at Buffalo that year and seven the next.

After spending two seasons back at AA with the Royals and Padres, Romero returned to AAA in 1997 - and made the bigs.

"I didn't expect it to be this good," Romero told The AP that July. "It's going unbelievably good for me right now."

Romero then moved through five other organizations in the minors over the next four seasons. He played mostly at AAA, but also saw AA.