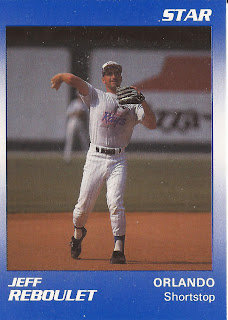 With Jeff Reboulet's Orioles looking for a win to close out the Mariners in this 1997 Division Series, Reboulet provided some early spark, with a first-inning home run.

And he did it off none other than Randy Johnson.

"I just put the bat on the ball," Reboulet told The Philadelphia Inquirer afterward, "and let Randy's speed do the rest."

Reboulet hit that home run in his sixth major league season. He went on to play in six more. Before his career was out, Reboulet played in more than 1,000 big league games, knocked in more than 200 and hit a total of 20 regular season home runs.

Reboulet's professional career began back in 1986, taken by the Twins in the 10th round of the draft, out of Louisiana State University.

It was in 1992 that Reboulet took that last step to Minnesota. With the Twins that year, Reboulet got into 73 games, hitting just .190. But that August, after knocking in three runs, Reboulet told The Associated Press he wasn't with the team for his bat.

"My job is defense and filling in when guys need a rest," Reboulet told The AP. "I'm not a real RBI guy."

From then on, Reboulet didn't miss a major league season through 2003. He stayed with the Twins through 1996, never getting in fewer than 74 major league games. He then moved to the Orioles, playing there for three seasons.

Reboulet then played for the Royals and Dodgers, then, finally the Pirates in 2003. With the Pirates, the 39-year-old got into 93 games, hitting .241, with three home runs.

Reboulet made the Pirates that May, after getting cut in spring training and signing with the Pirates to play at AAA. His manager at Pittsburgh, Lloyd McClendon, told The Beaver County Times why Reboulet was with the team.

"Jeff knows how to play the game, and he'll be a positive addition to our ballclub," McClendon told The Times. "He's a gamer, who knows how to do the little things on the baseball field that it takes to win."