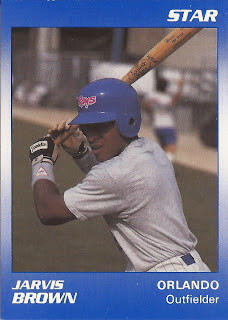 After playing 38 games for the Twins that year, Brown ended up making the playoff roster and getting into four games in the postseason. Three of those games were in the World Series, including as a pinch-runner in the classic Game 7.

"I know a lot of guys don't get that chance," Brown told The Milwaukee Sentinel the next spring. "I felt that my hard work and my ups and downs in the past five years really paid off."

Brown made the Twins that year in his sixth season as a pro, his second above single-A. He went on to see time in four more major league seasons, getting into 155 total regular season major league games.

Brown's pro career started in 1986, taken by the Twins in the first round of the January draft, out of Triton College in Illinois.

Brown played his first four seasons at single-A or rookie ball. He also stole bases. In 1987, between rookie Elizabethton and single-A Kenosha, he swiped 36. In 1988, spending the whole year at Kenosha, Brown stole 72.

"There is no question about how Jarvis can run and about how well he plays center field," Twins minor-league instructor Jerry White told The Orlando Sentinel that April.

Brown made the move up to AAA Portland to start 1991. By July, Brown was in Minnesota. In 38 games there, Brown hit .216, stealing seven bases. In the playoffs, Brown got into a total of four games, but two at bats.

"I'm not used to hitting a lot of homers," Brown told The Associated Press. "I glanced at it a little and knew it was out there."

Brown got into just one more season, 18 games with the Orioles in 1995. He then continued to play in the minors and in independent ball through 1998. Brown then spent time as a coach in the minors.

In 2010, Brown was an assistant baseball coach at Carthage College in Wisconsin. He also looked back on his career to The Racine Journal Times. "I loved my job," Brown told The Journal Times.