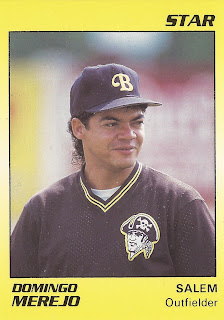 The Pirates lost a couple of outfield prospects in 1990, but they still had others in the pipeline, Pirates assistant GM Cam Bonifay told The Pittsburgh Post-Gazette the next April.

Though Bonifay mentioned Merejo, a veteran of five minor league seasons with the Pirates, Merejo didn't play at all that year, or again. He made AA, but didn't make the majors.

Merejo's career began in 1986, signed by the Pirates out of his native Dominican Republic.