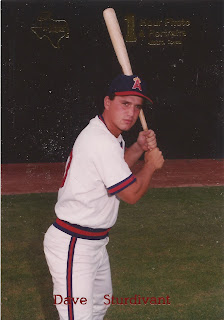 Bend Bucks catcher Dave Sturdivant was in a groove this night in August 1988 and the opposing runners paid the price, according to The Bend Bulletin.

Sturdivant caught three runners trying to steal. One of them came at third base to complete a double play on a strikeout, The Bulletin wrote.

Sturdivant was in his first season as a pro that year. He got into just two more. He made AA, but didn't make it higher.

Sturdivant's career began that year in 1988, taken by the Angels in the 10th round of the draft out of the University of Nevada, Las Vegas.

Sturdivant won second-team all-conference honors in 1988. He made the National Baseball Congress World Series in 1987, hitting a two-run home run in an August game. He hit a three-run home run in a March 1988 game for UNLV.

Sturdivant played his first season with the Angels at short-season Bend. He got into 50 games, hitting .188. He walked and scored in a June game. He singled in another game.

For 1990, Sturdivant returned to Palm Springs. He also got time at AA Midland. Between them, he .213. It was his final season as a pro.