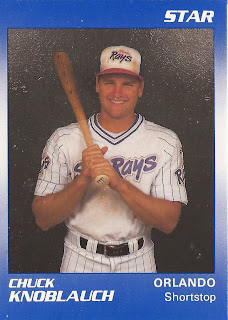 Chuck Knoblauch had just had a whirl-wind year in 1991. The year before he was at AA Orlando. He not only made it directly to Minnesota for 1991, he was an integral part of the Twins' championship run.

He also won himself the American League Rookie of the Year award along the way.

"I can't spend too much time thinking about what has happened since last March," Knoblauch told the St. Petersburg Times as the Twins took on the Braves in the World Series. "My head might spin.

"It was good from the beginning this season," Knoblauch added, "and it's kept getting better and better."

Knoblauch stayed with the Twins through 1997, unable to stop thinking about that championship year and the team failures that followed. When he moved on to another contender, the Yankees, his thinking continued, especially about throwing. Some said he was thinking too much.

Years after it was all over, Knoblauch's name showing up in the Mitchell Report, some were thinking other things about him.

It started for Knoblauch in 1989, taken by the Twins in the first round of the draft. He hit his way through single-A that year and then took on AA Orlando for 1990. Then came 1991 and his call-up to Minnesota, bypassing AAA altogether.

That first year with the Twins, Knoblauch played in 151 games, hitting .281 with 50 RBIs and 25 stolen bases. He also received 26 of 28 first place votes for AL Rookie of the Year. "Luckily I was on a winning team, did some things well and had a consistent year," Knoblauch told the Associated Press.

"There's not one bad thing I can say about the Twins," Knoblauch told the AP that September. "They gave me an opportunity to play major league baseball and they've been very good to me."

"To not have the ability to win," Knoblauch added, "which is everybody's goal, is no fun."

It was that off season that the Twins dealt Knoblauch to the Yankees. It was soon after that his throwing troubles began. He couldn't get the ball to go where he wanted it to, a problem for any fielder, including a second baseman.

And the problems persisted. He first wouldn't talk about it, according to The New York Daily News. He then talked about seeing a hypnotist in 1999.

"I probably won’'t worry about it until the off season," Knoblauch told The Daily News as the Yankees prepared for the Braves in the 1999 World Series. "It's not going to be cured overnight."

But, they continued. In June 2000, Knoblauch had three errors in one game and walked out. By 2001, he was no longer a second baseman, he was a left fielder.

Knoblauch had one more year in the majors, his 12th season, in Kansas City. It was an injury-plagued year that saw him hit just .210.

Then, in 2007, Knoblauch was in the headlines again, named in the Mitchell Report. Brian McNamee told baseball investigators that he injected Knoblauch with Human Growth Hormone in 2001 seven to nine times. Knoblauch didn't respond to investigators for the report.

He later met with congressional investigators in February 2008. After the meeting, Knoblauch told waiting reporters, "I want baseball to be fair and healthy just like everybody else."