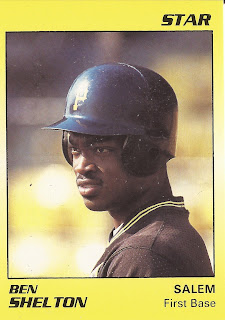 Ben Shelton hit his first major league home run in June 1993 and he did it off his hometown club, the Cubs, according to The Pittsburgh Post-Gazette.

"That was very special," Shelton told The Post-Gazette afterward of the eighth-inning shot. "It came against the Cubs, and I know all my family and friends were watching back home."

Shelton hit that home run in his fourth major league appearance. He went on to see 15 major league games that year and hit a second home run. Those games and home runs marked the extent of his big league career.

Shelton's pro career began in 1987, taken by the Pirates in the second round of the draft out of Oak Park-River Forest High School outside Chicago.

At Oak Park, Shelton showed his skills on the mound, as well as at the plate. In May 1987, rival coach Paul Franson recalled to The Chicago Tribune Shelton's recent outing against his club. Shelton struck out 14.

"That game he pitched against us was as well-pitched a game as I've ever seen," Franson told The Tribune. "He was just spectacular. Plus, he's got the disposition that a coach likes to have. He doesn't seem to let very much bother him."

Shelton started with the Pirates in the rookie Gulf Coast League as a first baseman. He hit .286 in 38 games. He moved to rookie Princeton and single-A Augusta for 1988. He hit .211 on the year.

He made high-A Salem in 1990 and hit AA Carolina in 1991. He payed 1992 completely at Carolina. That spring, he spoke to The Associated Press about slumps and learning from them.

"I'm starting to understand that you can't get down over one bad day," Shelton told The AP. "Everyone is going to have them during a long season. Once I get past that, I think I'll be fine and I'll make it to the major leagues."

For Shelton, the major leagues happened the next year. He started the season at AAA Buffalo. He got his call to Pittsburgh in mid-June. He picked up six hits in 24 at bats.