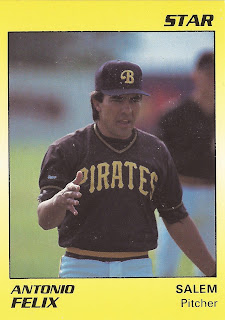 The Mexico City Diablos faced off against the Sultanes de Monterrey this day in June 1991 and the Mexico City pitcher Antonio Felix had a career night.

Mexico City won the game 9-0, according to the book Diamonds Around the Globe. Felix threw a no-hitter.

Felix played that year in Mexico - and the majority of his career - after a brief stint in the minors in the United States. He played three seasons in the minors. He never made AA.

A native of Sonora in Mexico,  Felix' pro career began in 1985 as a player in his home country.

He played at Veracruz that year and moved to Cordoba and Leon in mid-1986. He arrived in Mexico City for 1987 and part of 1988. He was then signed by the Pirates.

Felix played his first year with the Pirates between rookie Princeton and single-A Augusta. He went 3-5 between them, with a 3.49 ERA.

Felix played his final year in the minors in 1990 at high-A Salem. He got into eight games and had a 7.54 ERA.