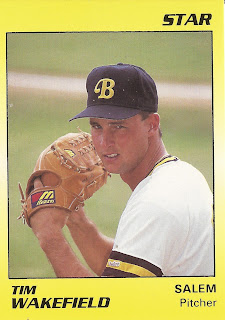 On the occasion of his first All-Star birth in 2009, Tim Wakefield marveled at his career to the New York Times.

"It's a pretty cool story," Wakefield told the Times. "It makes me understand how blessed I am to have had a second chance."

By that point, Wakefield's story included 17 major league campaigns. He recorded double-digit wins in 11 of those. He'd also helped win two world championships, all through a nearly unhittable knuckleball.

And he did it all after he started his career as a first baseman.

Wakefield's career began in 1988, taken by the Pirates in the eighth round of the draft out of the Florida Institute of Technology.

Wakefield started with the Pirates at short-season Watertown as a position player. He hit just .189 in 54 games. If his bat didn't get him noticed, it would soon be his arm.

"To this day, I don't know who was warming up with him, but I was talking to someone in the dugout when Tim said, 'Watch this,'" Pirates minor league coach Woody Huyke recalled years later to ESPN. "He threw a knuckleball. I said, 'Not bad, throw it again.' He threw about three more, and I turned around and walked away."

Pirates brass soon saw it, too, and Wakefield started his life not only as a pitcher, but as a knuckleballer.

Wakefield burst onto the Pittsburgh scene in 1992. He went 8-1 over 13 regular season starts to help the Pirates to the playoffs and earn third in the Rookie of the Year balloting. That October, he spoke to the Times about taking the mound in the NLCS.

Wakefield was more than fine. He won both his starts, throwing complete games in both.

Wakefield returned to the majors with a breakout year. He went 16-8, with a 2.95 ERA. He also earned third in the American League Cy Young voting.

He then returned with the club to the 2004 playoffs and kept the Red Sox alive in Game 5 with three innings of scoreless ball to record the win.

"I just tried to keep us in the game as long as I could," Wakefield told reporters afterward. "They asked me how long I could go, and I said, 'I'll give you what I've got.' "

Wakefield continued with the Red Sox through 2011, helping the club to another championship in 2007. He ended his career with 200 wins to 180 losses. He also ended six wins short of the Red Sox club record.

"It's a little surreal for me, still," Wakefield told ESPN of his achievements after announcing is retirement. "Once I get home and start to digest everything, it's pretty cool to have your name up there, but that doesn't change who I am as a person, or as a man and I'm grateful I've had the opportunity to achieve a lot of those goals and be high on the list of a lot of those records. Hopefully one day they can be broken because that's what records are for."
1990 Minor League Tally
Players/Coaches Featured: 2,903
Made the Majors:1,083-37.3%-X
Never Made Majors:1,820-62.7%
5+ Seasons in the Majors: 450-X
10+ Seasons in the Minors:270
Posted by Steve78 at 9:00 PM