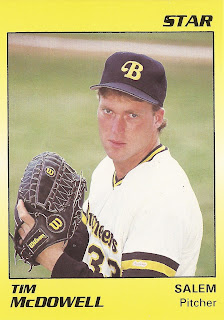 Growing up the son of a successful major leaguer had its drawbacks, Tim McDowell told The Washington Post in 1986.

He got articles written about him, but his dad, Sam McDowell, seemed to be the real focus, he told The Post, especially early on.

"But then toward the end of high school a lot of the articles were because of how I was doing," Tim McDowell, then a junior at American University, told The Post. "It got toward the end that I was getting three paragraphs and my dad was just getting a sentence. - I would tease my dad about that."

He did follow his dad into another profession - addiction recovery. His father, as well known now for his addiction to alcohol and recovery as his 15-season major league career, went on to be an addiction recovery consultant for the Baseball Assistance Team. The son followed his dad in that role in 2016.

Tim McDowell's career began in 1988, signed by the Pirates as an undrafted free agent.

McDowell started with the Pirates at rookie Princeton. He went 3-5, with a 3.69 ERA. He told The Pittsburgh Post-Gazette that July in an article that also touched on his father that he just went out to do his best.

"I mostly use my fastball," McDowell told The Post-Gazette of his approach, "but I throw the curve a lot and I'm using the changeup more than I ever did before. I still need to work on it some more."

He moved to single-A Augusta in 1989. He went 6-8 there, with a 2.85 ERA. He had a tough start in the playoffs that September, giving up seven runs, four earned, in just two innings of work.

McDowell picked up his degree in psychology from Rice University. By April 1992, he was with his father's Triumphs Unlimited program. The program covered sports psychology and preventing drug and alcohol problems.

"I make myself available to the players," McDowell told The Tulsa World then. "That's the big thing. It's the catching of symptoms and patterns in advance that can nip the problems before they become serious."