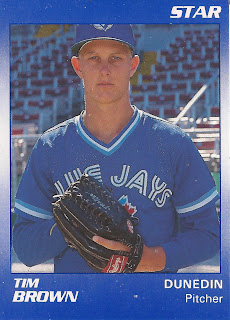 Midway through his first year at AAA, Tim Brown was perfect.

Despite that outing, though, Brown couldn't break through to the majors. That year marked his sixth as a pro. He got into one more season, also at AAA, but never made the bigs.

Brown's career began in 1988, taken by the Blue Jays in the 25th round of the draft out of St. Petersburg College. He went there out of Brandon High School in Florida.

Brown made all-state at St. Petersburg. He started with the Blue Jays at short-season St. Catharines. He went 1-3 there over 15 outings, eight starts. He threw a four-hit shutout against Hamilton in his  second start.

Brown played 1990 at high-A Dunedin. He started off slow, going two innings in an early April game and giving up two earned. Overall, he got into 36 games in relief and posted a 4.43 ERA.