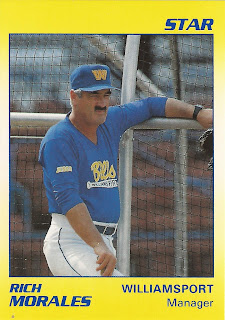 Others said Rich Morales couldn't play everyday. But Morales knew he just hadn't got the chance, he told The Associated Press.

This was May 1972 and Morales was in the midst of a season in which he would see time in 110 games for the White Sox.

"I've always had confidence in my ability," Morales told The AP. "But other people have been hesitant to use me. Sometimes it's hard to shed the labels."

Morales ultimately played in eight major league seasons. He then went on to a long career as a coach, helping to make sure others made it to their full potential.

Morales' career in baseball began in 1963, signed by the White Sox as an amateur free agent out of the College of San Mateo.

Morales started at single-A Clinton. He hit AA Lynchburg in 1965 and AAA Indianapolis in 1967. That August in 1967, Morales also debuted in Chicago.

By 1979, Morales was a manager in the minors, helming short-season Medford. Early that July, Morales was still trying to figure out what kind of club he had as his team won its third straight, according to The Eugene Register-Guard.

"We've played our best baseball of the season against them," Morales told The Register-Guard of Eugene. "I thought the difference has been beating them on their home field the first night. It gave us a lot of confidence - more than we've had all season - and we've played like it the past two nights."

Morales stayed managing in the minors through 1982. He then became a scout for the White Sox. In 1986, Morales served as a bullpen coach for the Braves.

In 1988, he was back in the minors as a manager at AA Vermont, then AAA Calgary in 1989. In 1990, he was at AA Williamsport watching over future major leaguer Rich DeLucia.

"He has quick feet and he knows what he's doing out there," Morales told The Reading Eagle of DeLucia that July. "He's definitely the best fielding relief pitcher in the Eastern League."