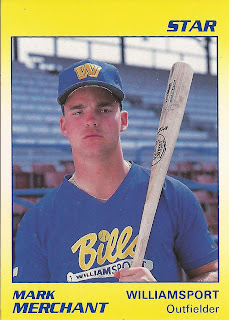 Talk was, he was going to go in the top five picks and Merchant then would start his march to the majors.

"I'm pretty calm now, but I can't wait, though," Merchant told The Orlando Sentinel. "It's something I've been waiting for all my life."

Merchant did go in the top five. He went second overall to the Pirates. But, in a career that spanned a dozen seasons, Merchant never saw the majors.

Merchant's career began that year in 1987 when the Pirates selected him out of Oviedo High School. After the selection, Merchant didn't need time to think about signing. He signed three hours after he was drafted, The Pittsburgh Post-Gazette wrote.

Early in the 1989 season, after a good spring, Merchant was traded to the Mariners in a five-player deal. The move meant the Mariners had the top pick from the 1987 draft in Ken Griffey, Jr., and the second pick in Merchant. The two, though, would never be teammates.

Going into 1989, Merchant was still looked at as a Pirate outfielder of the future.

''I don't know how long it will take,'' Merchant told The Sentinel. ''I just have to play a game at a time, a season at a time. I want to be in all 140 games for Augusta - no injuries this year, just a lot of ballgames and times at bat.''

Merchant played out the year at single-A San Bernardino, hitting .210 in 119 games. He started 1990 at AA Williamsport, but also saw time back in California.

In 1991, it was high-A Peninsula and AA Jacksonville. He hit six home runs in 78 games at Peninsula, his fourth coming in mid-May.

Merchant played all of 1992 at Jacksonville. In July, he got three hits in a game, one of the hits a home run at Orlando. On the year, he hit .244.

Merchant moved to the Reds system for 1993, getting his first look at AAA. His only prolonged time at AAA came in 1996, with the White Sox and Royals AAA clubs.

Merchant has since moved to Colorado, where he is a real estate appraiser. By 2007, he was married with two children.

Looking back on his career then to The Sentinel, Merchant cited two bad injuries, He suffered one running the outfield wall in 1988, hurting his shoulder.

"I had those two devastating injuries," Merchant told The Sentinel. "When you lose your speed and arm, that kind of puts a damper on your game."