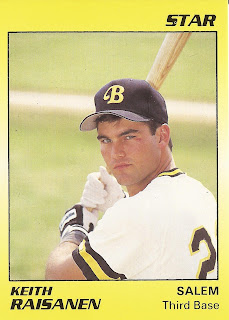 Keith Raisanen made it into his fourth professional season at high-A Salem. Then he took a fastball to his hand, The Anniston Star wrote years later.

"I just enjoyed every moment of it," Raisanen told The Star in 2014. "I loved it. It just killed me that I couldn't play anymore."

Raisanen started his career in 1987, taken by the Pirates in the 25th round of the draft out of Birmingham-Southern College.

He started with the Pirates at short-season Watertown. He hit .217 in 41 games. He then moved to single-A Salem and Augusta for 1988. He hit .224 between them with six home runs.

Raisanen started to gain some traction in 1989 back at Augusta. He hit .263 on the season, with 15 home runs and 92 RBI. He even made the league all-star team.

By June 1989, he was hitting .275 and had 10 of his home runs. He also received praise from his manager Stan Cliburn.

"I knew the power was there ... it was just a matter of getting , him playing every day," Cliburn told The Pittsburgh Press that June. "He has a pure swing."