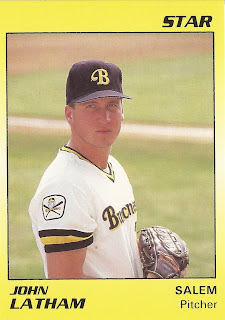 The Augusta Pirates had a bad day in this July 1990 game. Reliever John Latham made the best of it, according to the Spartanburg Herald-Journal.

Augusta lost the game 9-3, but Latham finished it out with five outs. He gave up two hits, but no earned runs.

Latham pitched in that game in his third season as a pro. He played in one more campaign. He never made AA.

Latham's career began in 1988, taken by the Pirates in the 30th round of the draft out of Spartanburg Methodist College.

He played his first season between rookie Princeton and the rookie Gulf Coast League. He went 0-3 over 10 outings four starts. He ended with a high ERA of 9.61.

He played 1990 between high-A Salem and single-A Augusta. He went another five outs of scoreless ball against Spartanburg in an August contest. Overall, he went 4-6, with a 5.16 ERA.