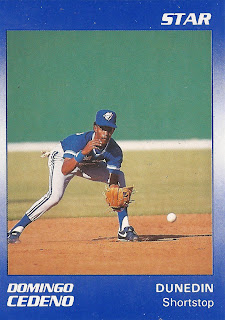 Domingo Cedeno hit a home run for the Rangers on this night in June 1998 and drove in all three of the team's runs, according to CBS News.

"Domingo is a guy who you put out there part-time, every once in awhile and he will play like he did tonight," Oates told reporters afterward. "He's not a guy who is going to play 140 games. His game is to play in maybe 70."

Cedeno played a total of 429 games over his seven-season major league career. He played in over 100 games in a season once, with the Rangers in 1997.

Cedeno's career began in 1987, signed by the Blue Jays as a free agent out of his native Dominican Republic. Cedeno's brother is Andujar Cedeno, who also made the majors.

Cedeno initially played in the Dominican Summer League. He started stateside in 1989 at single-A Myrtle Beach, Dunedin and rookie Medicine Hat. He made AA Knoxville in 1991. He first made AAA Syracuse in 1992, then Toronto in 1993.

That August, Cedeno hit a game-winning, extra-inning home run to give his Phillies the win.