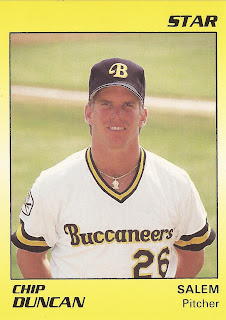 Chip Duncan spent a decade in the pros. He made AAA, played in Mexico and even had a stint in Taiwan. He never made the majors, but he still had a good time along the way, he told The Fort Myers News-Press years later.

"I enjoyed every minute of it," Duncan told The News-Press in 2004. "You get close, you think you're a phone call away. I was a few times, but you're not hot at the right time. It's all about a matter of timing and luck, and a little bit of talent mixed in there."

Duncan started his career in 1987, taken by the Pirates in the 12th round of the draft out of Columbus State University in Georgia.

Duncan began with the Pirates at short-season Watertown. He went 4-2 over 24 relief outings. He started the year with 22 strikeouts in 17 innings of work, while saving four.

He moved to single-A Salem for 1988 and stayed there for three seasons. He went 8-10 his first year there as a starter and 6-4 as a reliever there his last.

Duncan started 1991 at AA Carolina with the Pirates then moved to the Royals and AA Memphis. He returned to Memphis in 1992. He pitched in 33 mostly relief games, with a 4.66 ERA.

He soon moved to Taiwan that year and the next, then returned to the Phillies and AA Reading in 1994. He first saw AAA in 1995 with the Ranges and Brewers.

He last played in the minors in 1997 with the Twins at AAA Salt Lake and finished up his career with another stint in Taiwan.

Duncan has since returned to Fort Myers. In 2009, he was named head baseball coach at South Fort Myers High School.