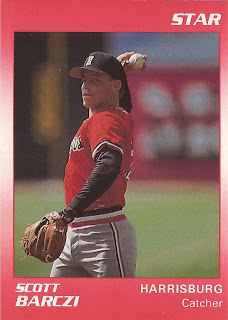 Asked in July 1990 who the best defensive catcher in the Eastern League was, Reading Phillies radio broadcaster Randy Stevens had trouble coming up with an answer, according to The Reading Eagle.

Though he picked the hometown Reading catcher, the first catcher he named for The Eagle was the one from Harrisburg, Scott Barczi.

Barczi was in his fourth professional season that year, his first at AA. His defense, though, couldn't carry him. He hit just .197 on the year. It was his final season as a pro.

Barczi's career began in 1987, taken by the Pirates in the 10th round out of Northwestern University.

With the Pirates, Barczi started at short-season Watertown. He hit .308, with 15 stolen bases.

For 1989, he played at single-A Salem. He got into a game that spring, getting a run-scoring triple. He knocked in a run on an April single then two runs on a single in May.