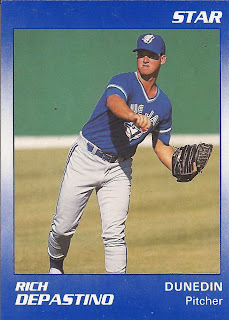 Rich DePastino got the call in 2003 and he couldn't help but cry, he told The New York Times.

His brother Joe DePastino had made the majors after a long career in the minors. A former minor leaguer himself, Rich DePastino couldn't help but compare for The Times his brother's career to his own career.

"I didn't have half the work ethic Joe does," Rich DePastino told The Times.

Rich DePastino's career began in 1986, taken by the Blue Jays in the ninth round of the draft out of Riverview High School in Sarasota, Fla. DePastino was also credited as Richard DePastino.

At Riverview, DePastino won all-area and all-state honors and played in the 1985 Babe Ruth World Series.

He started with the Blue Jays at rookie Medicine Hat. He went 4-3, with a 5.15 ERA over 16 outings, 10 starts. He threw a seven-inning no-hitter in August against Salt Lake.