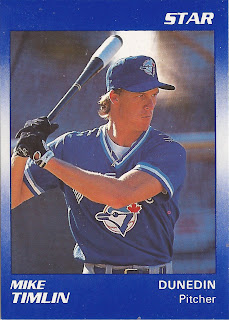 "I've pitched about 45 post-season games," Timlin told The Times. "That doesn't mean you don't get nervous."

Timlin pitched in that post-season in his 18th and last season in the bigs. Along the way, he saw the playoffs 11 times. He also saw the World Series on four occasions, two each with the Blue Jays and the Red Sox. His teams came out victorious on all four trips.

Timlin's career began in 1987, taken by the Blue Jays in the fifth round of the draft out of Southwestern University in Texas.

Timlin started at rookie Medicine Hat. He made single-A Myrtle Beach in 1988, then AA Knoxville in 1990.

In 1991, he made Toronto and he hardly saw the minors again. He got into 63 games for the Blue Jays in 1991, starting three. He went 11-6 and saved three games and saw his first post-season action.

He saw his first World Series in 1992. He pitched a scoreless inning in Game 5 and picked up the save in the deciding Game 6. Timlin even made the toss to first baseman Joe Carter to seal with title on a bunt by Otis Nixon.

"I've dreamed about this more times than I've gotten out of bed," Timlin told reporters afterward. "I saw in class and dreamed about it. I thought about it all the time."

Timlin returned for another World Series win in 1993, where he saw two appearances against the Phillies and didn't give up a run.

After then playing for the Cardinals and the Phillies, Timlin landed with the Red Sox for 2003. In 2004, he helped Boston to the title. He recalled later in the book "Idiots Revisited" hitting the field at Fenway in the World Series was a much different experience than the regular season.

"Your senses are so heightened," Timlin told author Ian Brown. "It's a great place to play, obviously. When you get into the World Series, it's just totally special."

Timlin then finished out his major league career in 2008 and got one final look at the playoffs, if not the World Series.