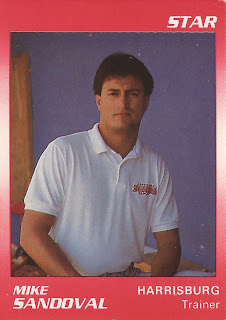 Longtime trainer Mike Sandoval spoke to his home state's Albuquerque Journal in 2007 and explained the goals of a trainer.

"Everybody wants to win and get to the playoffs, but I honestly don't think wins and losses matter to the training staff," Sandoval told The Journal. "The goal with any of us is keeping our players healthy and making sure we do everything we can to keep these guys on the field."

By 2007, Sandoval had worked toward those goals over two decades in the game. He's since continued for another decade. In 2018, he continues in baseball in a new major league role, assistant trainer for the Tampa Bay Rays.

Sandoval started toward training at New Mexico State University, where he served as a student trainer for the school's basketball, football and track teams.

His first professional training job came with the Pirates at short-season Watertown. He then moved to rookie Princeton and then single-A Salem in 1989. He began keeping AA players on the field in 1990 at AA Harrisburg and stayed with the AA Pirates club as it moved to Carolina in 1991.

Sandoval continued with the Pirates through 2011. In 2008, he became assistant trainer for rehab in Pittsburgh. He moved to the Rays and AAA Durham for 2012. He served as trainer for the International League All-Star team in 2014.