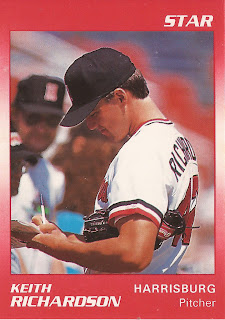 In July 1988, his first full month as a pro, he went 4-1 between single-A Augusta and short-season Watertown.

In 35.1 innings, the second gave up just 19 hits, The Washington Observer-Reporter wrote. His ERA came in at just 0.76. He also won organizational Pitcher of the Month honors.

Richardson, though, couldn't keep it up. His career ended just two seasons later. He made it to AA, but he didn't make it higher.

Richardson's career began that year in 1988, taken by the Pirates in the second round, 43rd overall, out of Georgia Southern University.

With the Pirates, Richardson started at Watertown, Augusta and single-A Salem. Between them, he went 9-2, with an ERA of 1.03.