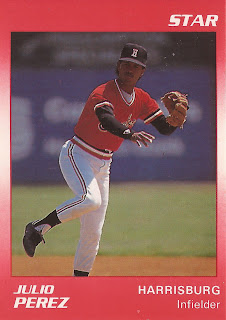 Julio Perez helped manufacture a run for his single-A Macon team in this June 1987 contest and it got his team an early lead.

Perez started by working a walk, according to The Sumter Item. He then used his speed to steal second and then take third on a bad throw. It then paid off with Perez scoring on an infield single.

That stolen base for Perez was one of 29 he swiped in 1987. He went on to steal a total of 129 in his six-season professional career. He never had the chance to steal one in the majors.

Perez' career began in 1985, signed by the Pirates as an undrafted free agent out of his native Dominican Republic. Perez has also been referred to by his given first name, Pedro Perez.

Perez opened between the rookie Gulf Coast League and short-season Watertown. He hit .299 in 64 games between them.