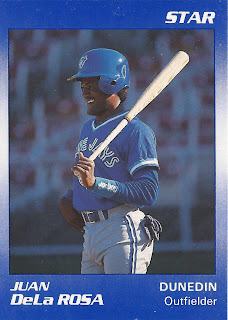 Down by one in the bottom of the eighth of this May 1992 game, Knoxville outfielder Juan De La Rosa came through with the big hit, according to The Associated Press.

De La Rosa did so by hitting a three-run home run to lift his AA Blue Jays to a 6-4 win, The AP wrote.

De La Rosa hit that home run in his seventh season as a pro. He went on to see time in 12 seasons. He made AAA, but never made the bigs.

De La Rosa's career began in 1986, signed by the Blue Jays as a free agent out of his native Dominican Republic. He was also credited as Juan DeLa Rosa.

De La Rosa made AAA for the first time in 1993, getting 60 games at Syracuse. He hit .227 and had trouble hitting with runners in scoring position. By mid-June, he was 0 for 28 in that department.

He moved to the Twins system and AAA Salt Lake for 1994. He doubled in a run in a May game. He then returned there for 31 games in 1995 before he played out the year at independent Winnipeg.