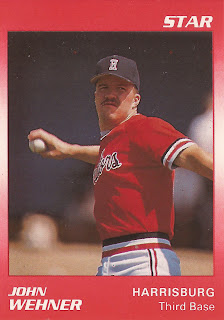 The Pirates new third baseman John Wehner dove one way, throwing across the diamond to get the out. Later, another Wehner dive started a Pirates double play, The Pittsburgh Post-Gazette wrote.

It was enough for Wehner, only recently called up to the majors that year in 1991, to impress Pirates manager Jim Leyland.

"It's only his second game," Leyland told The Post-Gazette, "and I don't want to go overboard, but he sure played great tonight ... He'll put his nose in the dirt."

Wehner played well enough to go on to see time in a total of 11 major league seasons. In that time, Wehner took that defensive play to every position on the field except pitcher, earning the title of utility player.

The Pittsburgh native has since gone on to add the position of broadcaster to his resume, serving in that capacity for his hometown Pirates since 2005.

Wehner's career began in 1988, taken by the Pirates in the seventh round of the draft, out of Indiana University.

He started at short-season Watertown that year, hitting single-A Salem the next and then AA Harrisburg in 1990. It was in 1991 that he first made AAA Buffalo and debuted with the Pirates.

Wehner played those games in 1991 exclusively at third. Going into 1992, though, Wehner won the job as the Pirates utility man. He was just happy to get the shot, he told The Post-Gazette.

"A year ago now, I was just hoping to get to Triple A, have a good year and get called up in September," Wehner told The Post-Gazette. "I never thought I'd be in this position this soon. But I think the opportunity's there, and I want to fill that void."

Wehner played in 55 games that year, and three separate positions. His average, though, dropped to .179. He returned for 29 games and five positions in 1993 and two games in 1994.

Wehner stayed with the Pirates through 1996, playing catcher for the first time, one game, in 1995.

For 1997, Wehner signed with the Marlins, playing 44 games for the eventual world champions. He returned to Pittsburgh in 1999, the first of three final seasons with time in the majors.

In his second-to-last season, Wehner put his mark on his hometown Three Rivers Stadium, hitting the final home run there and making the final out.

His playing career over, Wehner served to years as hitting coach for AA Altoona. In 2005, he was named a Pirates broadcaster, a position he is continuing into 2012. He works all road games and some at home.

At the end of his first season as a broadcaster, Wehner analyzed his own performance to The Post-Gazette, wondering if he brought too much of his Pittsburgh roots to the booth.

"It's much different than anything I've done before," Wehner told The Post-Gazette. "I talk like I'm from the streets of Pittsburgh, and I don't know how well that goes over. The whole Pittsburghese thing is something I've got to work on."