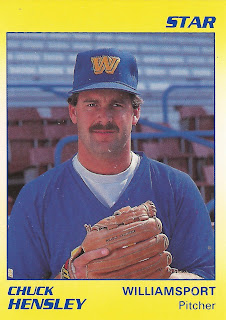 Chuck Hensley knew he could still play going into 1985. He just needed the right agent, it seemed to convince a team of that, according to The Los Angeles Times.

"I had another agent and he couldn't get me invited to spring training," Hensley told The Times that July. "I dropped the guy and went with Kevin. He made one phone call and I was with the Giants. It was amazing."

For Hensley, it turned out to be a good move. Not only could he still pitch, but the next year he was pitching in the majors.

Hensley's career began in 1980, taken by the Tigers in the 10th round of the draft out of the University of California.

Hensley started with the Tigers at single-A Lakeland. He posted a 3.36 ERA in 28 relief outings. He was then released and picked up by the Athletics.

Hensley played 1981 between single-A Modesto and AA New Haven. He went 9-10, serving mostly as a starter. Back at New Haven in 1982, Hensley went 10-4, with a 3.91 ERA splitting time between starting and relief.

Hensley then signed on with the Giants. He played 1985 between AA Shreveport and AAA Phoenix. He had a 3.08 ERA between them.

He returned to Phoenix for 1986. He then debuted in San Francisco in May. Hensley got into 11 games in relief, giving up two earned in 7.1 innings of work. He got two stints with the team, his first the Giants saw as "fairly impressive," according to UPI.

By July, though, his major league career was done. He finished out the year at AAA. He then played four more seasons in the minors, three of them at AAA and his last at AA Williamsport in 1990 with the Mariners, ending his career.