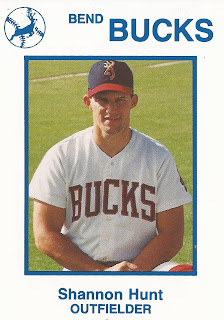 Upon taking the helm at New Mexico Highlands University in 2014, Shannon Hunt suggested his coaching tenure would be about the basics.

"Baseball has not changed since its beginnings; you hit the ball, you catch the ball, you throw the ball, pretty simple really," Hunt told the school. "I have been very fortunate to experience the game at many levels, both collegiately and professionally as a player and a coach."

Hunt's brief pro career began and ended in 1990, signed as a pro as an undrafted free agent at short-season Bend. He played his college ball at DeAnza College, Butte College and Lewis-Clark State College.

At Bend, Hunt knocked in a run in a July game, then hit his first professional home run in an August contest. He hit two home runs on the year. Overall, he hit just .141. He knocked in seven and stole two bases to mark the extent of his playing career.

In 2005, he made the jump to the top spot, as head coach at El Paso Community College. He tried his hand at independent ball in 2010 with Traverse City as hitting coach.

"He has an extensive and impressive background and resume which covers his playing career, head coaching and scouting," Langbehn said, according to the team. "He has basically done it all. His attention to detail in regards to hitting mechanics and mental approach are going to only make our hitters that much better."