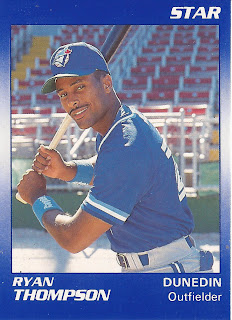 Ryan Thompson worked in June 2000 to earn a permanent spot with the Yankees, according to The New York Daily News.

He tried to do it by showing off his skills, The Daily News wrote.

"It's a matter of going out and doing it, though," Thompson told The Daily News. "You can't talk about it, you've got to do it."

By that point, Thompson had tried it over seven major league seasons and four organizations. But he hadn't yet broken through, or at least fulfilled the promise once seen in his early career.

Thompson never showed enough with the Yankees to stick. He saw 33 games with them that summer and went on to play with the Marlins and Brewers to end his nine-season big league career.

Thompson's career began in 1987, taken by the Blue Jays in the 13th round of the draft out of Kent County High School in Maryland.

He started at rookie Medicine Hat, then made single-A Dunedin in 1988 and AA Knoxville in 1991 and AAA Syracuse in 1992.

He moved to the Indians for 1996, but only saw eight games. He played 1997 completely in the minors. To The Daily News in March 1997, though, Thompson remained optimistic.

"My outlook hasn't changed," Thompson told The Daily News. "The door of opportunity is still open for me. I've learned a lot. I know what I can do and I still believe it'll happen for me."

He played 1998 in Japan with Daiei. He then returned stateside and played 12 games with the Astros in 1999. He played three more seasons, spending time with the Yankees, Marlins and Brewers to end his career.