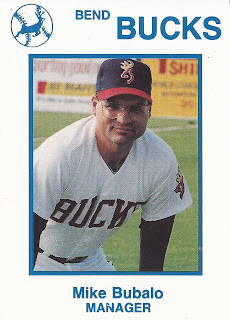 Bend Bucks manager Mike Bubalo had a unique perspective on his hurler Chuck Wanke's performance this night in June 1990, according to The Bend Bulletin.

That's because Bubalo had coached Wanke before - in high school, The Bulletin wrote.

"Chuck's a tough kid with a lot of fire in him," Bubalo told The Bulletin. "He had sound mechanics tonight. He's got to feel good about the way he threw - and he's capable of doing better."

At Beverton, he successfully saw off at least two players to the top of the game, as he watched over Beaverton players Steve Lyons and Steve Olin and saw them both eventually reach the bigs.

The Beaverton-native's long connection to baseball began in 1971, signed by the Dodgers out of the University of Oregon.

Bubalo played in two seasons. He played 1971 at short-season Medford and got into 68 games. He hit .257, with six home runs and 30 RBI. He then is credited as returning briefly in four games in 1974 for independent short-season Portland.

He started his coaching career by 1978, when he took the head coaching job at Beaverton. He soon saw the likes of Lyons come through the program. Lyons graduated there in 1978 and became a first-round pick for the Red Sox in 1981. He then went on to play in nine big league seasons.

Bubalo later saw Olin go through his Beaverton program. The Indians later drafted Olin in the 16th round and he made the bigs over four seasons before his passing.

Bubalo lead Beaverton to the 1985 state championship and went 261-106 during his time at the school.

Bubalo stayed at Beaverton through 1989, when he took the helm of Bend, which took players from four organizations and signed its own. To start that year, he talked up his Bucks after a late loss.

"We did some good things ... pitching especially," Bubalo told The Bulletin. "I saw some fundamental things we did wrong, but we have the ability. I mean, we have some kids out there who can play."