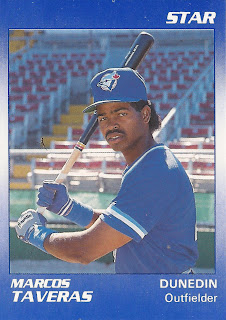 Marcos Taveras laced a ball to right in the seventh inning of this April game and it ended up breaking up a shutout, according to The Sarasota Herald-Tribune.

The Dunedin outfielder made it all the way to third after Sarasota right fielder Cliff Gonzalez went for the catch but missed, The Herald-Tribune wrote. Taveras then came around to score on a balk.

"It would have taken a helluva play to catch that ball," Sarasota manager Tony Franklin told The Herald-Tribune of the one Taveras hit. "It took a helluva effort to try."

Taveras picked up that triple and run scored in his third season as a pro. It also marked his last. He never made AA.

Taveras' career began in 1988, signed by the Blue Jays as a free agent out of his native Dominican Republic. He graduated from Politecnico High School in 1983 and he then attended Universidad Autonoma in Santo Domingo, where he played baseball.

He played his first season with the Blue Jays between single-A Myrtle Beach and short-season St. Catharines. He hit .205 in 82 games on the year. He did lead the New York-Penn League in putouts and fielding percentage.