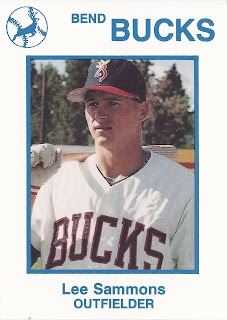 Lee Sammons' wife Chantay knew what she was getting into when she married Sammons, she told The Bend Bulletin in August 1990.

They would work on his career then and hers later, she told The Bulletin.

"And I'll play until they say they don't want me," the outfielder added to The Bulletin. "All I've ever wanted to do is play ball."

Sammons ended up playing ball for four pro seasons. He briefly played at AAA, but not the majors.

Sammons' career began in 1989, taken by the Athletics in the 26th round out of Augusta State University.

At Augusta, Sammons twice won all-conference honors and made the conference all-decade team. He did so by hitting .409 over his three-season stint. He also stole 41 bases to lead the conference in 1989.

Sammons started with the Athletics in 1989 in the rookie Arizona League. He hit .255 in 36 games.

He then moved to short-season Bend for 1990. He hit .261 in 69 games there. He also led the league with 45 stolen bases. To The Spokane Chronicle in August, Sammons praised his manager's tendency to run.

"We don't have much power on the team," Sammons told The Chronicle. "This is the way we score runs. If we're five, six runs down, we're still going to run."

Sammons kept running in 1991. He played the year largely at single-A Madison and stole 54 bases there while hitting .288. He also saw a two-game stint at AAA Tacoma. He went 1 for 5 and didn't get to attempt a steal.