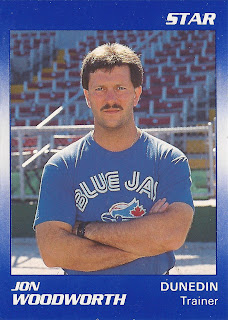 A pro trainer must tend to his players' injuries and help prevent them. As a trainer for the Blue Jays at AAA Las Vegas in 2009, Jon Woodworth's job also included pushing liquids, according to The Las Vegas Sun.

"For the most part, everyone is aware that this is the desert and you have to be careful," Woodworth told The Sun as the desert temperatures soared. "You have to be really, really good at replacing fluids."

Woodworth's long career as a trainer began in 1980, a graduate of East Carolina University. He started as trainer with the Blue Jays at short-season Utica. He moved to AA Knoxville in 1982, according to his 2001 card.

After three seasons at AAA Syracuse, Woodworth settled in for seven campaigns at high-A Dunedin. He won Florida State League Trainer of the Year honors there in 1993.

He returned to Syracuse by 1996 and continued through 2001. He again won league Trainer of the Year honors in 1999, according to his card.