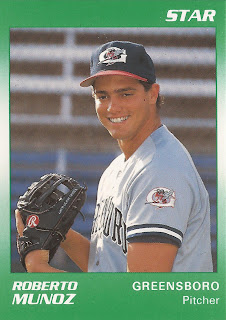 The Phillies traded for Bobby Munoz. It was just that exactly how the hurler would be used wasn't immediately clear, The Associated Press wrote in spring 1994.

The Phillies eventually used mostly Munoz' starter stuff that year. He continued using mostly that stuff through the end of his career.

By the time he was done, Munoz had time in seven major league seasons, getting into 100 major league games. He was used as a starter in 38 of those.

Munoz' career began in 1988, taken by the Yankees in the 15th round of the draft out of Palm Beach Community College in Florida. Munoz was also known by his formal name Roberto Munoz.

Munoz hit the field with the Yankees in 1989. He got five starts between the rookie Gulf Coast League and single-A Fort Lauderdale.

Munoz turned reliever at Columbus. He also debuted in the majors. Munoz got into 38 games in relief for the Yankees that year, with a 5.32 ERA. In August, he intentionally walked Frank Thomas, the gave up a two-run double to Ellis Burks.

For 1994, he arrived with the Phillies and turned largely starter. He got into 21 games and started 14. He also ended with an improved ERA of 2.67. Munoz the hitter knocked a home run that June. At 6 feet, 8 inches tall, he also became one of the tallest players to do that.

An injury limited his 1995 season. He tore a muscle in the spring and was still rehabbing in July. He started three games with Philadelphia that year and just six the next.

"My confidence is a little down right now," Munoz told The AP afterward. "I have to keep striving to get better. I just have to get over this and not let it carry over to my next game."

Munoz came back for nine outings, one start, with the Orioles in 1998. He then returned to the minors and came back for one more major league season in 2001, with the Expos.

He got into 15 games, seven starts that year for Montreal, with a 5.14 ERA. He played one more season in the minors, ending his career.