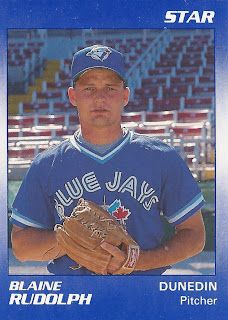 The Dunedin Blue Jays already up big in this July 1990 game, relief pitcher Blaine Rudolph came on to close it out, according to The Sarasota Herald-Tribune.

Rudolph pitched two innings in that effort, giving up two hits and a run in the Dunedin 11-1 victory over Sarasota, The Herald-Tribune wrote.

Rudolph finished out that game in his fourth season as a pro. It also marked his last. He made it to high-A, but never made it higher.

Rudolph's career began in 1987, taken by the Tigers in the ninth round of the draft out of Fresno City College in California. He played his high school ball at McLane High in Fresno.