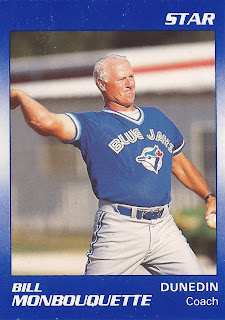 "He’s got a chance to be a franchise player, and I don’t use that term lightly," Monbouquette told Baseball America. "When I say franchise player, I’m talking like a Garciaparra, a Ken Griffey before he got hurt, a Bonds maybe without as many home runs."

Monbouquette's assessment of the future All-Star Ramirez came from experience, more than four decades of it as both a coach and as a player.

As a player, Monbouquette spent 11 seasons in the bigs, made three All-Star teams himself and, for one night in 1962, was nearly perfect as he threw a no-hitter for the Red Sox.

As a coach, Monbouquette served as a coach in the major leagues with the Mets and the Yankees before embarking on a minor league coaching career that took him through the Blue Jays and Tigers systems.

Monbouquette's long career in baseball began in 1955, signed by the Red Sox out of Medford High School in Massachusetts.

He played his first season at Class D Corning and Bluefield. He made Class B Greensboro and Class A Albany in 1957. In 1958, he made Boston.

He made his second Mid-Summer Classic in 1962, then he threw his no-hitter. That August, he beat the White Sox 1-0, without giving up a hit.

"I knew it all the way," Monbouquette told UPI afterward. "Nobody on the bench said anything about it."

He saw another possible no-hitter evaporate in September 1964 on a Zoilo Versalles home run.

Monbouquette played eight seasons for the Red Sox and became a fan favorite in the process. His best season may have been 1963, when he went 20-10.

He last played in 1968, finishing out his 11-season career with the Tigers, Yankees and Giants.

He then turned to coaching and scouting. He served as manager at rookie Johnson City in 1969, then Wausau in 1976 and Mets minor league pitching instructor. In 1982, he moved up to Queens as Mets pitching coach.

"It is a great pleasure to add Bill Monbouquette to our coaching staff," Mets GM Frank Cashen told UPI. "He brings with him a multitude of strengths. He is a first class instructor. He knows our personnel, having worked with most of them in our minor league system and his past success as a major league pitcher speaks for itself."

He moved to the Yankees as major league pitching coach in 1985. He arrived with the Blue Jays in 1988 as coach at single-A Myrtle Beach. He then coached at high-A Dunedin in 1989.

"He was a gutsy guy, straightforward," former Red Sox teammate Ted Lepcio told The Boston Globe after Monbouquette's passing, "and not only a very good pitcher, but an excellent teacher of pitching, and we remained friends ever since our playing days."
1990 Minor League Tally
Players/Coaches Featured: 2,878
Made the Majors:1,073-37.3%-X
Never Made Majors:1,805-62.7%
5+ Seasons in the Majors: 444
10+ Seasons in the Minors:267
Posted by Steve78 at 10:18 PM