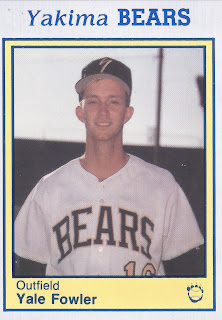 Fowler did so by knocking an eighth-inning "towering two-run homer" to tie the game at 10, The Sun wrote.

Fowler hit that game-tying shot months before he turned pro. He went on to a pro career that lasted two seasons. He hit just a single pro home run. He didn't make single-A.

Fowler's career started that year in 1989, taken by the Dodgers in the 32nd round of the draft out of Cal State San Bernardino.

Fowler played his high school ball at San Pasqual in California. He helped stop an opposing comeback with a May 1985 triple. He picked up two hits and four RBI in a March game that year. He hit a home run in a March 1988 game for Cal State San Bernardino.

With the Dodgers, Fowler started at rookie Great Falls. He hit .220 in 40 games, with one home run and nine RBI.