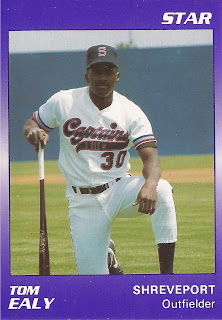 The Lakeland Tigers won two-straight games in August 1992 and Tom Ealy put himself in the center of both victories, according to The Lakeland Ledger.

Lakeland won the first night 4-0 on the strength of Ealy's two RBI. The next night, his home run and RBI single put the club up 2-0 on its way to a 4-3 win, The Ledger wrote.

Ealy helped in those wins in his eighth season as a pro. He'd made AA the previous two seasons, but he never made it higher. That season at high-A Lakeland proved his final season as a pro.

Ealy's career began in 1985, taken by the Giants in the 30th round of the draft out of Chaparral High School in Las Vegas. Ealy also sometimes goes by his formal name, Thomas Ealy.

Ealy started with the Giants at short-season Everett. He got into 25 games, hitting .203. He then played 1986 between short-season Tri-Cities and single-A Clinton. The outfielder hit .241 between them.

Ealy went on to work as a scout with the Braves. He's since returned home to Las Vegas and works a as a realtor. In May 2015, The Las Vegas Review-Journal featured Ealy and his 13-year-old scooter-enthusiast son at the North American Pro Scooter Championship.