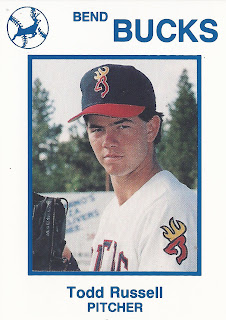 Todd Russell started strong in this June 1990 game. Then came the seventh inning, according to The Bend Bulletin.

After he allowed no earned runs through the first six, Russell opened the door for six runs. Five of those runs were charged to Russell.

Russell took the loss in that game and in four others that year, his second as a pro. He went on to see time in one more season. He never made AA.

Russell's career began in 1989, taken by the Athletics in the 28th round of the draft out of Pearl River Community College in Mississippi.