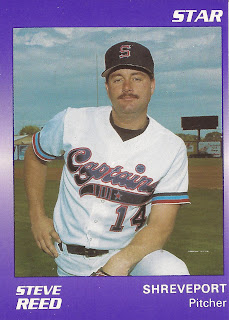 The score tied with the bases loaded in the bottom of the ninth, the Braves needed a stop. They turned to reliever Steve Reed to do just that.

Reed came on with one out.  He then proceeded to induce a pop out and a fly out to send the game to extras - all in a pennant race, according to The Associated Press.

"There's not a lot of room for error, obviously," Reed told The AP. "You try to tune out all the bad things that can happen."

By that point, Reed had a decade of getting out of major league tight spots under his belt. By the time he was done, he had a total of 14 seasons in the majors and 833 major league appearances.

Reed did all that after his career began as an undrafted free agent in 1988. The Giants signed him out of Lewis-Clark State College and Moorpark College.

Reed started with the Giants at rookie Pocatello. He moved to single-A Clinton in 1989, then AA Shreveport in 1990 and AAA Phoenix in 1991.

Reed made the Giants in San Francisco for September 1992. He got into 18 games, giving up two home runs. One of those home runs came off Mike Piazza's bat, Piazza's first major league home run.

After being taken in the expansion draft by Colorado, Reed picked up nine relief wins in 64 major league outings in 1993. He did that after struggling early and spending some time back at AAA.

"Looking back now, struggling like I did probably made me a better player," Reed told The Los Angeles Times that August. "I'd worked so hard to get (to the big leagues), I wasn't having any fun. Now, if I get hit, I get hit. If I lose, I lose. I just do the best I can every time I'm given an opportunity."

Reed stayed with the Rockies full-time through 1997, getting into at least 60 games each season. He then returned to the Giants to start 1998, moving to the Indians mid-season. He pitched two scoreless innings in his Indians debut in July.

After staying with the Indians into 2001, he arrived with the Braves for the second half. He introduced himself by getting into the 10th inning of game where he arrived in the eighth inning against the Mets to face Piazza. He got Piazza to hit into a double play.

"I said, 'Hi, I'm Steve Reed. How are you doing. I throw a fastball, slider and changeup," Reed recounted to The AP afterward. "'Let's go.'"

At the start of his final season, Reed talked to The Baltimore Sun about where he fit in. In the end, though, Reed wasn't concerned.

"It doesn't really matter to me where I pitch," Reed told The Sun. "I've never really cared. You'll end up where you are by the way you're pitching. I look forward to being a part of whatever position they want to put me in."