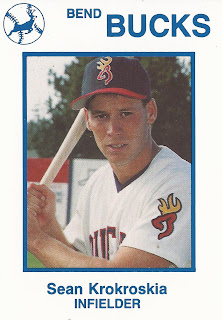 Sean Krokroskia earned his manager Mike Bubalo's confidence early in the 1990 season and Krokroskia proved in one July game that trust to be well-placed, according to The Bend Bulletin.

Krokroskia knocked a late, tie-breaking, rally-starting single, when a more traditional approach might have been called for, The Bulletin wrote.

"We could have bunted, moved the runners over," Bubalo told The Bulletin. "But not with Krokroskia. Kro's one of our best competitors. We want him to swing the bat."

Bubalo trusted Krokroskia to swing the bat, Krokroskia's second season as a pro. Krokroskia's competitiveness, however, couldn't get him a third season. He played in just those two campaigns. He never made single-A.

Krokroskia's career began in 1989, taken by the Athletics in the 48th round of the draft out of Southwestern Oklahoma University. He went to Johnson County Community College before Southwestern.

Krokroskia soon found himself back at school. He served as an assistant coach Pittsburg State University in Kansas over five seasons. He later entered the high school ranks as a softball coach at Fort Scott High School in Kansas and coaches softball with Prime Time Hitting.