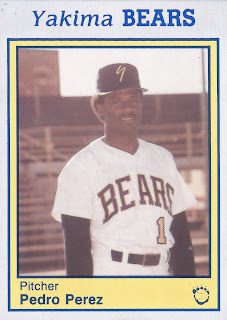 If the Yakima Bears were to have a chance in this August 1990 game, they needed a ninth-inning stop, according to The Bend Bulletin.

Yakima called on reliever Pedro Perez to hold Bend and he did. In his one inning of work, Perez set the Bucks down in order, The Bulletin wrote.

Perez held Bend in his second season as a pro. He played in two more. He briefly made AA, but never made it higher.

Perez' career began in 1989, signed by the Dodgers as a free agent in out of his native Dominican Republic.