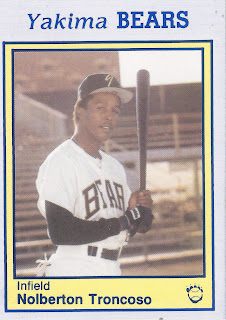 Yakima blew out Bend in this August 1990 game and Nolberto Troncoso did his part to help pile on, according to The Bend Bulletin.

Troncoso went 1 for 4 in the game, but scored two runs as Yakima came out on top 8-1, The Bulletin wrote.

Troncoso's career began in 1989, signed by the Dodgers as a free agent out of his native Dominican Republic. Troncoso's name has also been misspelled as Nolberton Troncoso.

Troncoso played his first season with the Dodgers in the rookie Gulf Coast League. The first baseman hit .300 in 48 games, with 27 RBI and 20 stolen bases.