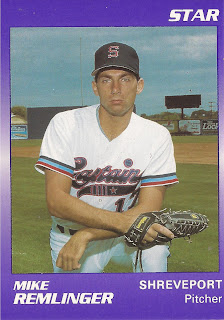 The Giants took Mike Remlinger in the first round of the 1987 draft, but a quick move up to AA nearly proved disastrous, according to The Associated Press.

Pitching on a cold night in Tulsa for Shreveport, suffered an arm injury and ended up losing speed on his fastball as a result, The AP wrote.

"I got off track for a while," Remlinger told The AP years later. "But I'm back."

Remlinger spoke to The AP after making the majors briefly with San Francisco in 1991. He wouldn't return to the majors again until 1994. But once he got back, he became a major league fixture for a decade.

He also made a major league All-Star team.

Remlinger's career began that year in 1987, taken by the Giants 16th overall out of Dartmouth College.

He played that first season between short-season Everett, single-A Clinton and a stint at Shreveport, all as a starter. He returned to Shreveport for 1988, but got into only three games.

Remlinger returned to the field for a full 1989 between Shreveport and AAA Phoenix. He turned in a total 4.98 ERA. He played all of 1990 at Shreveport, then started 1991 at Phoenix.

After moving to the Mariners system in a trade and spending the next two seasons back in the minors, Remlinger returned to the majors with the Mets in 1994. He got into 10 games, starting nine. That July, he threw a four-hitter in a win over his old team the Giants.

"I've worked really hard the last two years," Remlinger told The AP of his return. "I've really struggled, so coming back here was very special. I was treated real well by the Giants and outstanding by the Mets."

"Remlinger is the guy no one talks about. I can't get anybody to write about him," Cox told The AP. "He comes in and strikes out one or two guys every time he pitches. He's been dynamite for two years."

Remlinger stayed with the Braves through 2002. That final year with Atlanta, Remlinger turned in a 1.99 ERA over 71 games. He also made the All-Star team.

Remlinger moved to the Cubs for 2003, staying there into 2005. He then got time that year with Boston before returning to the Braves for 2006. He got into 36 games that year, with a 4.03 ERA, ending his career.

Remlinger finished with time in 14 major league seasons, 639 big league appearances and a career ERA of 3.90.