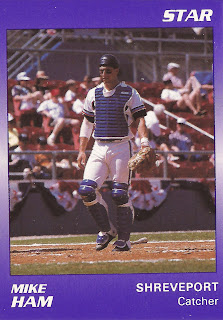 Mike Ham made AAA Phoenix in 1989, but it wasn't so much for his own play. The AAA club had an injury hole to fill, according to The Los Angeles Times.

Ham, though, tried to make the best of it, The Times wrote, coming through big in two early games.

"We knew Mike was a great defensive catcher, but he's holding his own as a hitter," Giants assistant director of minor league Dave Nahabedian told The Times. "That's surprised us. But, there he is with two game-winning hits."

Ham got into 16 games for Phoenix that year, his third as a pro. He played one more season. He never made it higher.

Ham's career began in 1987, taken by the Giants in the 24th round of the draft out of Cal State Fullerton.

Ham then played 1990 back at San Jose and Shreveport. In 24 games, he hit .255, ending his professional career.