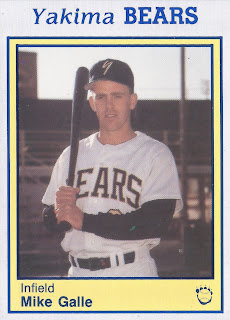 Galle and Kitchel each hit two home runs, Kitchel recalled, off the Evansville hurler who, weeks later, would be taken No. 1 overall in the draft.

"Coach Alexander to this day still chuckles about the postgame interviews Mike and I did with the media," Kitchel recalled to Purdue Sports. "We had no idea Benes was so highly regarded, so when asked about the game we both just kind of shrugged it off as no big deal in our 'country bumpkin way.'"

While Benes went on to be a top pick and make the bigs, Galle and Kitchel didn't fare as well. Kitchel never turned pro. Galle made the pros in 1989. He only stayed two seasons.

Galle was taken by the Dodgers in the 21st round of the 1989 draft out of Purdue.