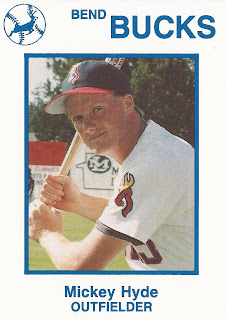 Mickey Hyde picked up two strikes on him in this July 1990 at bat for the short-season Bend Bucks. On the next pitch, he simplified his goals, Hyde told The Bend Bulletin later.

"I just wanted to put the ball in play," Hyde told The Bulletin.

Hyde did just that - and then put it out of play. Hyde hit a three-run home run for Bend to help the club on to a 7-1 win, The Bulletin wrote.

Hyde hit that home run in his second season as a pro. He went on to see a total of five professional seasons. He made AAA, but he didn't make the majors.

Hyde's career began in 1989, signed by the Phillies as an undrafted free agent out of Genesee Community College in Western New York.

Hyde went to Genesee out of Pavilion Central Schools near Batavia, NY. He grew up carrying the name of Mickey Mantle, his hometown Batavia Daily News wrote. He won regional all-star honors in high school in both baseball and basketball. He won a spot in the district Hall of Fame in 2016.

At Genesee, Hyde won all-district and all-region honors and won Scholar-Athlete of the Year. He also made that school's Hall of Fame.

His pro career began with a tryout for the Phillies, The Daily News wrote. Signed, the club sent him back home to short-season Batavia. Hyde hit .249 over 53 games for his hometown team. He remains the most recent local player to play for Batavia.