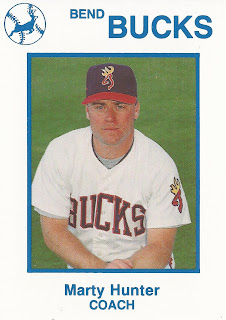 Shortly after George Fox University named him its new head baseball coach in 2007, Marty Hunter explained to The Portland Tribune his approach to the game.

"I believe in pitching and playing good defense," Hunter told The Tribune. "We want to make other people earn whatever they get. We'll be scrappy on offense and put pressure on teams in a smart way."

Hunter took the helm of the Oregon School after stints as a coach in high school - and a brief early stint as a coach in the pros. He continues at George Fox in 2017.

Hunter graduated from Gresham High School in Oregon and then Linfield College in 1984, according to George Fox. He arrived in Bend, Ore., in 1990, where he served as a coach for the independent Bend Bucks.

For the Bucks, Hunter watched the Bucks give up 10 runs in the fourth inning of a June game at Bend's Vince Genna Stadium. "Good game until that one big inning," Hunter told The Bend Bulletin afterward.

He then coached at Bend High School and then Canby High School. He regularly took Canby to the playoffs, all while also teaching.

In 2014, he returned to Bend as head of the city's summer collegiate league team, the Bend Elks. Elks owner and GM Jim Richards could only praise Hunter to The Bulletin.