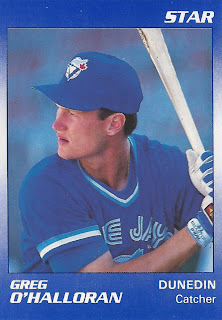 Baseball was Greg O'Halloran's second sport growing up. The Canadian's first: Hockey, according to The Los Angeles Times.

His college baseball coach at Orange Coast College Mike Mayne explained to The Times in 1990 O'Halloran's smaller size helped him make his decision to play baseball over hockey.

"When he got into the higher levels of hockey, he was getting his block knocked off," Mayne told The Times. "He figured that even catching would be safer than playing hockey."

O'Halloran's choice eventually paid off in the majors. His major league career consisted of 12 games spent with the Marlins in 1994. He played as a pro over eight seasons, but his big league time remained confined to that one season with Florida.

O'Halloran's career began in 1988, taken by the Blue Jays in the 32nd round of the draft out of Orange Coast.

O'Halloran joined the Blue Jays after playing on the 1988 Canadian Olympic baseball team.

He recalled in May 1990 to The St. Petersburg Times telling his family outside of Toronto of his hopes in baseball. Everyone laughed.

"This winter I even found a journal I had kept where I had written what I said and people told me, that's great Greg. Hope you do it. But nobody took me seriously," O'Halloran told The Times.

O'Halloran started with the Blue Jays at short-season St. Catharines in 1989. The catcher hit .283 over 69 games. He hit five home runs.

O'Halloran moved to the Marlins for 1994 and then he made the majors. He debuted May 16 and played his last game Aug. 6. He scored the winning run of a May game after getting his first hit.

He played the balance of that year at AA Portland. He then played 1995 with the Cubs briefly at AAA Iowa and then at independent Duluth-Superior. He finished out his career in 1996 in Mexico and 1997 in Taiwan.